Well, it is official.  Madison moved out of our home this week.  This may be a shocker to some of you, and it was a shocker to me as well when I heard her idea for the first time.  She was welcome to stay in our home as long as she wanted, but she wanted to make the choice to move out and live on her own. 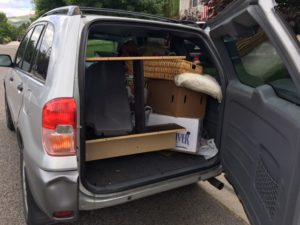 I have always been one of those moms who did not like to mix the colors of the Playdough together.  The red Playdough should never get mixed in with the green.  Do you know what I am saying to you?  Those that know me well can totally see that I am that kind of person I am sure.  However, if each emotion I felt this week were a certain Playdough color, my emotions would be a big mixed-up ball of rainbow Playdough!

I have run through excitement for her, sadness, tears, hurt, fear, doubt and back full circle again to excitement.  The first night she slept in her apartment, I was up for at least 3 hours of that night.  I stared at the ceiling.  I got up around 3 am to eat a snack, because I had been up so long I had gotten hungry.  I tossed.  I turned.  My mind would not turn off!  I prayed.  I worried.  I shed a few hot tears.

I am one of those moms who will stay up until all of my kids are home.  Having two teenagers in my home, sometimes that can be kind of late, but I know I will not be able to sleep well unless I have “all of my chicks in the nest” as I like to say.  How many times has one of my kids come in the door, and I will then say, “Now, all of my chicks are in the nest.”  I will then proceed to lock the doors, set the alarm and go to bed. 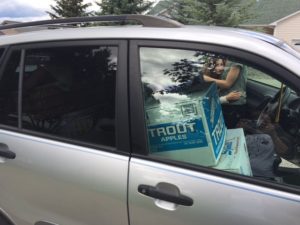 That night all of my chicks were not in the nest nor would they most likely ever be again.  The questions would not turn off.  Had I done enough?  Could she afford to live out on her own?  Does she have a good lock on her door?  What if something happened to her?  Did I truly trust God more than my fears? My baby girl was out on her own, and I can say that most of what I felt was fear for her.  I have spent all of my life as a mother protecting my kids from what I thought or knew could hurt them, and now I had no control.  She was truly in God’s hands now.

When I woke up in the morning, I was truly exhausted and decided to look at Facebook while I tried to pry my eyes open.  What did I see on there but words of encouragement from my sweet friend, Melissa, who wrote the following words to me.

“…So crazy how fast time goes.  People tried to tell us but I really thought I would potty train FOREVER! You’ve raised an incredible girl! This next stage of parenting brings with it so many great joys! Parenting an adult, from my perspective, has been character building for me to trust the Lord with what I don’t know but it has also been incredibly fun! I wouldn’t trade it. Enjoy this process friend, the Lord is with you!”
Tears filled my eyes.  God knew exactly what I needed, when I needed it, and who I need it from.  Melissa and her husband are who would take our kids if anything ever happened to Carl and I.  I trust their parenting and their devotion to the Lord implicitly.  These words permeated my spirit.  God would watch over her just as He always had.  Her age and her location would not change that fact. He would also give me whatever wisdom I needed as I crossed this new bridge of parenting an adult.

We met Madison at the mall later that same day.  She beamed her beautiful smile, and I hugged her so big and so tight.  When I asked her how her first night was on her own, she said she had a great night in her new apartment.  She also proceeded to tell us later that she had gotten a promotion and a raise that very day as well so she would have more than enough money to afford her rent and other expenses.
God is so good.  There are those moments in my life when I worry and wonder if He has got me, a particular situation or someone else.  Why do I doubt?  Why do I worry?  I think He just might have Madison and I right where He wants us…in the palm of His hand!
“Therefore do not worry about tomorrow, for tomorrow will worry about itself.  Each day has enough trouble of its own.” Matthew 6:34, NIV