My dog, Scout, is 13 years old now.  She will be 14 years old here in a few months.  She has a condition called Laryngeal Paralysis which makes her gag, vomit and have breathing issues a lot of days.  Because of this condition, Carl and I have to clean up her vomit off of our floor at least 1-3 times a week.  We are going through about a can of Spot Shot a month. 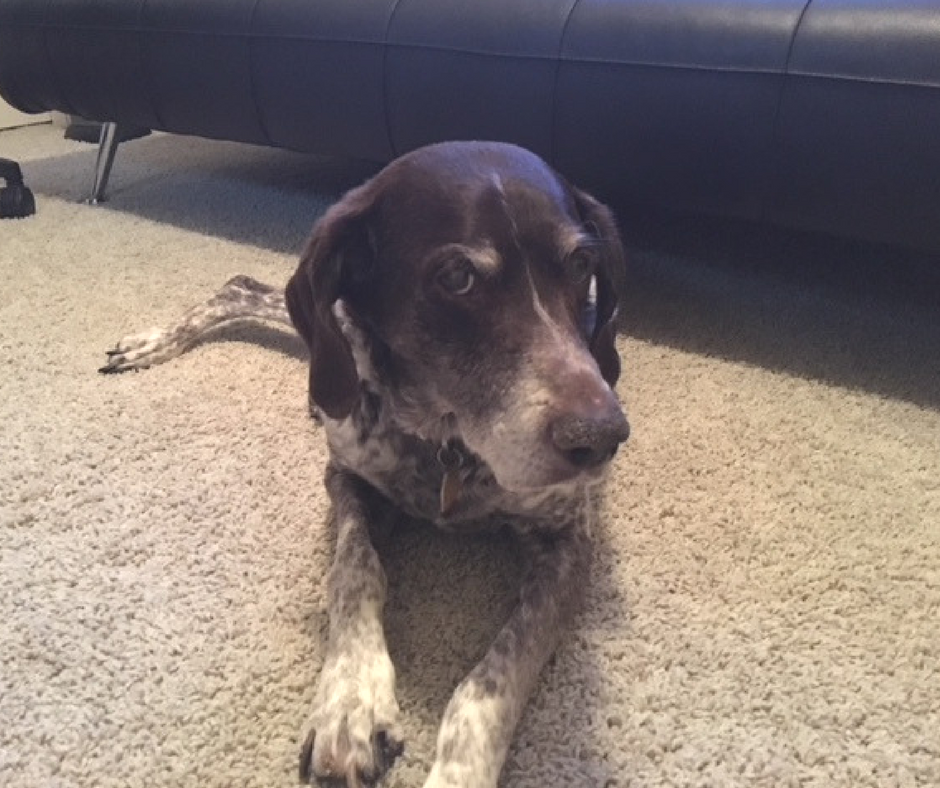 She was nervous to let me take her picture.  I think she thought she was in trouble.

Her condition is common in older dogs who are medium to larger breeds.  What has happened is the muscles in her throat surrounding her larynx have gotten weak with age.  This causes her throat to collapse on itself.  She will gag, gag until she vomits, or sometimes literally not be able to draw breath.  We have her on a medication which calms her and allows the throat not to spasm as much.  Even though the medication works, we are still unfortunately cleaning up vomit a lot.

In the last few weeks, she has thrown up some pretty gross stuff which any dog would, right?  Before we can even realize she has thrown up or go to get the supplies to clean it up, she will walk over and start consuming the vomit again.

Carl and I are always so incredibly grossed out when she goes back to eat her vomit as we are trying to clean it up.  We have been saying almost every time, “As a dog returns to its vomit…”  The whole verse from Proverbs says this.

With the frequency of the occurrence as well as the amount of times we have been saying that phrase, I began to wonder, “What areas of my life could I be returning like a dog back to my vomit?  In what areas am I a fool repeating my folly?”

Maybe your folly is yelling as a parent.  Maybe it is overspending or gossiping.  It really can be anything which is not pleasing to God which we find ourselves repeating over and over again.

Thanks be to God that He forgives us every time, but He also loves us enough to not want us to stay in a folly or a sin which so easily ensnares us (Hebrews 12:1).  So, what do we do if we are caught in a cycle?

“If they have escaped the corruption of the world by knowing our Lord and Savior Jesus Christ and are again entangled in it and are overcome, they are worse off at the end than they were at the beginning.  It would have been better for them not to have known the way of righteousness, than to have known it and then to turn their backs on the sacred command that was passed on to them.  Of them the proverbs are true:  “A dog returns to its vomit,” and, “A sow that is washed returns to her wallowing in the mud.”  2 Peter 2:20-22, NIV

Stop wallowing in the mud my friends.  Stop returning to your old and past sins.  We are stronger than that, because we can do all things through Christ who gives us strength (Philippians 4:13).  Be blessed!