Skip to content
December 2, 2013 thecrosseyedblog Leave a comment
It is that time of year again when I think about what the Christmas season brings such as shopping for presents, putting up decorations, egg nog, and watching lots and lots of Christmas movies.  As I look around my house, however, I wonder where in the world I am going to put all of those new toys or books for the kids, decorations I bought to replace old ones from last year, or the new clothes which might be given to replace the old clothes on my hangers.
Amid all of the hustle and bustle, I usually try to make time to do some sort of a purge in December.  There are several reasons that I do this.  First, I know our family, the kids especially, are getting ready to get inundated with lots of presents.  Usually, their closets have not had a huge purge during the year.  I might purge a little in the spring, but there are lots of clothes, shoes, toys, and books that the kids either don’t fit into or use anymore.
I challenged my family to each take a kitchen trash bag and fill it up to the brim with items they did not use, like, or want anymore.  You can give your family member a lawn and leaf bag if you are really serious.  I then sorted through the items in the bags.  There were a few items I picked out of the bags to go in the trash or to go in the keepsake bin with most of it going in my donate bins to go to charity.
My donate bins are bins I have in my garage which I put items in that I will donate.  They are items that are still in good shape, but I have no use for anymore.  When one of the kids outgrows a pair of jeans, they get tossed into the donate bin.  A kitchen utensil I have never used goes in there.  Gifts I have gotten which I have never worn or don’t like go in the donate bin. 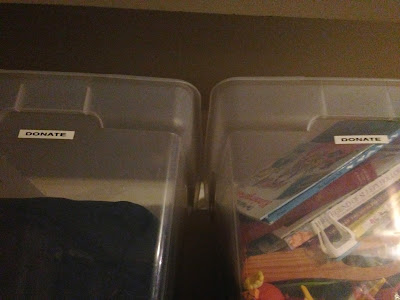 The donate bin was an idea I got from a book called The House that Cleans Itself by Mindy Starns Clark.  She stated in the book that we need to control or do the following three things to keep our houses clean: clean, trash, and purge.  I have found this to be true.  As Americans, we don’t usually have any trouble acquiring more and more stuff.  The problem arises when we don’t purge or give away the same quantity of stuff which we are taking into our homes.  So, my donate bins allows me to put items in it which I plan to be leaving our home.
This leads me to my second reason for doing a Christmas purge.  I like to do this early enough in the Christmas season so that people whose only option might be shopping at a second hand store have a chance to buy the items.  If you know of a family in need, just give the items to them rather than donating them to charity.  If there is a domestic violence shelter or a homeless shelter, you could check to see if any of your items fit their needs and donate them there.
The third reason, if you choose to drop your items off at a charity, is the tax write off.  This is the last month of the year so I usually try to make sure to get all of my items donated by the end of the year.  Don’t forget to itemize what you donated, get a receipt for your donation at the charity, and itemize the deductions on your taxes next year using It’s Deductible.
One of my favorite Christmas songs (it makes me tear up almost every time I hear it) is Little Drummer Boy.  He had no gift which was fit for a king so he played a song on his drum for Jesus.  I know it is a made up story, but I can’t help but think that God would have been pleased by the offering.  It reminds me of the rich people who put lots of money as their offering at the temple and the widow who gave all she had.  They gave out of their abundance, but she gave all she had (Mark 12:41-44).
We have so much.  We not only need to purge to keep an orderly house to help our home stay cleaner, but we need to be giving when we can.  One man’s junk is another man’s treasure, they say.

“Give, and it will be given to you.  Good measure, pressed down, shaken together, running over, will be put into your lap.  For with the measure you use it will be measured back to you.”  Luke 6:38