Within the last month or so, we have a little bit of a neat phenomenon happening in our family.   The first time it happened, I had made pancakes with huckleberry sauce for the family.  We picked the huckleberries ourselves up on the mountain side last year and still have a few yummy ones left.  After breakfast, I went to get ready for the day while Carl did the dishes.  He brought this spoon into the bathroom. 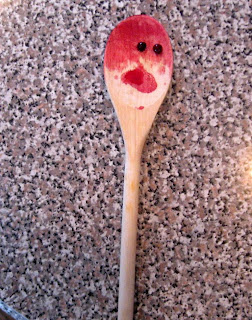 I thought that Carl had purposefully put the huckleberries onto the spoon and made a happy face to make me smile.  He said he had not done that, and he had found it on the counter while he was cleaning up.  It was the spoon I had used to stir the huckleberries.  We all had a good laugh about it and teased that we might be able to sell it on Ebay for thousands of dollars.  We said that maybe Jesus was smiling at us.  We thought it was worthy of a picture so I took one.

A few weeks later, I made oatmeal and the same thing happened.  I had to admit the face was not as prominent as the first one, but we all marveled at the face on the spoon which had now happened twice. 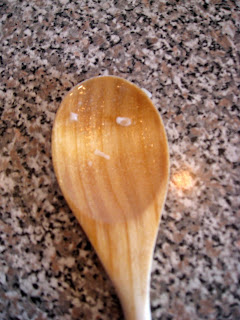 I couldn’t help but wonder at the smiley faces on the spoons.  Could it be God saying to be happy or he was pleased with me?  Was it my dad from the other side giving me a little “happy” which is what he used to call gifts?  Who knew really, but I have to admit it made my heart smile every time it happened.

“A cheerful heart is good medicine, but a crushed spirit dries up the bones.” Proverbs 17:22, NIV

Again, a week or two later, we went to Five Guys for hamburgers.  When we were all done, my son held up his foil hamburger wrapper. 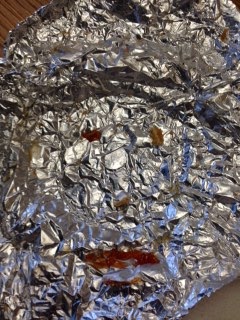 It might be a stretch to make a blog about food in face shapes, but it just kept happening over and over again.  Even my kids were intrigued by what was happening.

Yesterday, I had one of those days as a mom where you are just worn out and feeling like a failure as a mom.  Calgon is the word I kept hearing in my head repeatedly.  As I wallowed in my negative thoughts, the thought of the smiling spoon came into my head.

Christ was with me.  He knew how I felt.  He had a hard time controlling his kids too!  I knew in my heart that those feelings would pass and that Christ was there for me giving me strength.  He was telling me not to worry and that he had this.

I started writing the blog this morning.  I had already titled it “Don’t Worry, Be Happy” and had written the first few paragraphs.  However, I did not have time to finish it and planned to finish it up tonight.  Some friends treated us out to dinner and as we sat down, what do you think the first song was that came on at that restaurant?  “Don’t Worry, Be Happy”  I still don’t know what those food faces mean, but I think God is trying to tell me to not worry and to be happy.  Maybe He is trying to tell you the same thing as well.  Thank God we don’t have to do it all on our own!