I began this year to really pray for those who are enslaved in the sex trafficking industry.  As I myself have 3 children, my heart aches for parents who might have lost children by kidnapping or even parents and families who might have knowledge that their child or family member are in that life but are powerless to do anything about it due to not knowing where they might be.

These women are being kidnapped, because men desire to have sex with them, look at pornography which they are in, or to abuse them.  It is simple supply and demand really.  The women are there and are making money for their captors, because men are willing to pay all day and every day to have sexual relations with them.  If one woman was released, there would more than likely be another woman to fill her spot, because the men are still waiting there in line with their money in their hands.

Soon after, I came across these verses from Hosea and knew it was the answer for which I had been looking. 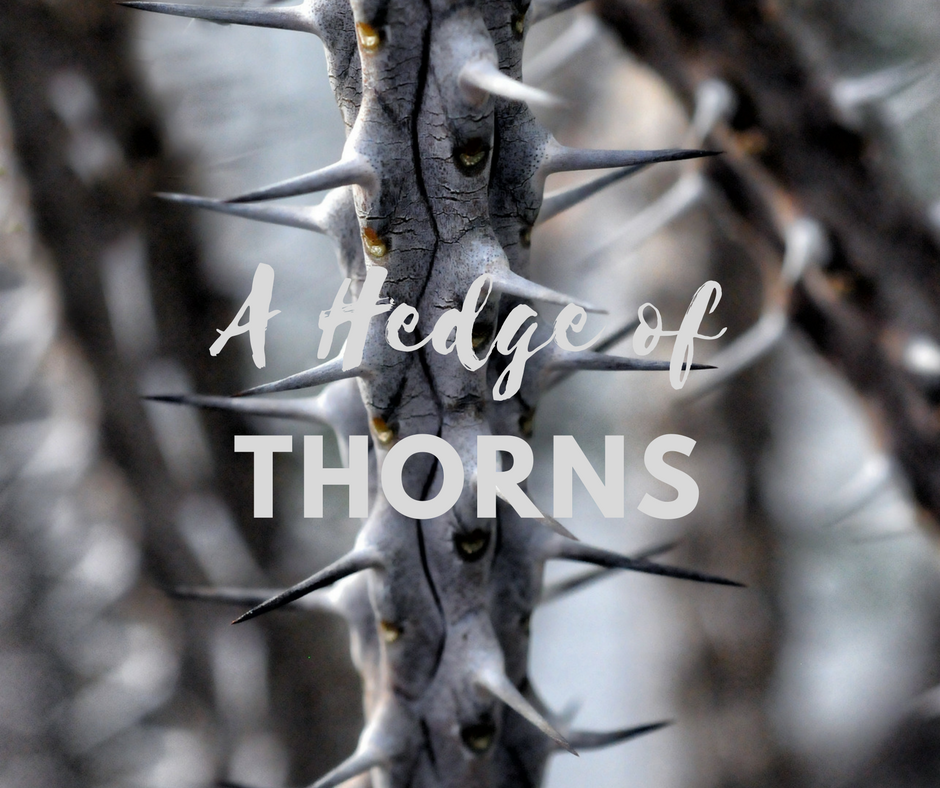 “Therefore, behold, I will hedge up her way with thorns, and I will build a wall against her so that she cannot find her paths.  She will pursue her lovers, but she will not overtake them;  and she will seek them, but will not find them.  Then she will say, ‘I will go back to my first husband, for it was better for me then than now!'” Hosea 2:6-7, NASB

I found this verse and the commentary below in a devotional book I read every day called Morning Manna by Steve Gaines.

“The prophet Hosea sat with his three children, weeping and in shock.  His wife, Gomer, had abandoned them not only for another man, but for other men.  She had literally become a harlot.  But God told Hosea that He would put a spiritual “hedge of thorns” around Gomer so that whenever she reached out to her lovers, something would go awry, and she would not be able to engage in immorality.  Likewise, whenever her would-be-lovers would reach out to her, their wicked overtures would be unsuccessful….Do you know someone who is straying from the Lord?  Perhaps they are even involved in sexual immorality like Gomer.  Pray that God will put His “hedge of thorns” around that person so that when they reach out to sin, they will not be successful.  Pray that they will return to Jesus, like Gomer returned to Hosea.”2

That is what I wanted to hear.  So I began to pray for a hedge of thorns to block these men’s paths.

I prayed that a man’s car would break down on the way so he couldn’t go.
I prayed a women’s handcuffs would miraculously fall off, and she would be able to walk out to freedom like Peter in Acts 12.
I prayed for a man to twist his ankle on the threshold of the building which houses these women.
I prayed a man would be rendered impotent so he could not do what he wanted with these women.
I prayed for conviction of sin for these men and for their captors.
I prayed for fleas or lice in the building to protect the women so the men would not want to go in like in The Hiding Place, and the women could be let go.
I began to pray for a hedge of thorns for these men which would not allow them to engage in this sexual immorality.

If God can part the Red Sea, can make a donkey talk, can turn Lot’s wife into a pillar of salt, then He can free both men and women alike from the bondage of sex trafficking.


“Surely the arm of Lord is not too short to save, nor his ear too dull to hear.”
Isaiah 59:1, NIV
1 Human Trafficking Facts
2  Morning Manna