If you have ever seen the movie The Sound of Music, I hope that you agree with me that it is such a great movie.  It is the movie my husband and I went to see on our first date at the old Orpheum theater in downtown Memphis, TN.  It was on this same night that Carl and I went out to eat at a restaurant downtown after the movie.  I was getting eaten alive by mosquitoes on my legs as we sat out on the patio when he said the line which would live in infamy ever since which was, “They sure have good taste.”  We still chuckle about the cheesiness of that line, but I digress.

If you have not seen the movie The Sound of Music, it is the story about a nun who loves the Lord, but it might be said that she is ill suited for the nun lifestyle.  She loves to sing and frolic.  The head nun sends her away to try her hand for a time at being a governess to seven children to determine if she really does want to be a nun or not. She does find out that she indeed is not meant to be a nun.

However, when she leaves the abbey, she is really saddened by her possible new direction.  She doesn’t want to leave the abbey.  On her way out the abbey doors from the life she once knew on her way to an unknown life as a governess, she is undoubtedly questioning what is next, and she says, “When the Lord closes a door, somewhere he opens a window.” 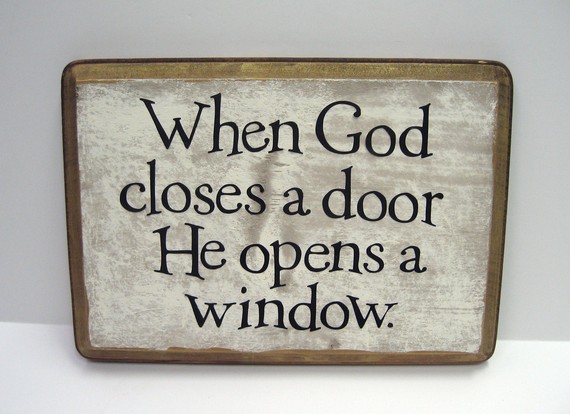 It is a great saying.  It provides warm fuzzies when things don’t go as we planned that they would.  The truth is that God can close a door, He can open a window, He may open the door back up later, but He may also choose to close the door and then proceed to lock the knob as well as the deadbolt so there is no way you can get back into it.

“Trust in the Lord with all your heart, and do not lean on your own understanding.  In all your ways acknowledge him, and he will make straight your paths.” Proverbs 3:5-6

A really funny thing happened though.  I felt relieved.  Self-doubt of being wrong or that I am not good enough have reared their ugly head in my mind, but really Carl and I both are relieved.

It is funny how the Lord works, and I am not sure what He will do with this closed door.  Maybe He will open a window, but maybe He won’t.  Maybe it was a test to see if I would learn something new on the journey.  Maybe it will give me tools for the next step of something else He will ask me to do.  Maybe I am not ready spiritually for the open door.  Maybe, but the truth is I don’t have any idea!

I just know that as I expressed in my blog from last week, Praying for Joy, I have been feeling overwhelmed.  To have one less thing on my plate is kind of a relief for me.  God is in control.  His plan is better than any plan I could ever make.

“In everything give thanks, for this is the will of God in Christ Jesus for you.”
1 Thessalonians 5:18