Recently, we went hiking, and we all got some drinks out of the cooler.  The kids sat their drinks down on rocks and stumps while they poked leaves with sticks and ran around.  When they returned, there was a lot of confusion about whose drink was whose.  Is this my drink?  No, I put my drink over there.  No, that one is mine.  I noticed when the drink could not be properly identified, there was a desire to get a new drink.  I have to admit, I am the world’s worst in this regard.  The thought of a child’s mouth not being properly wiped drinking out of my drink and backwashing into it really grosses me out.

When you have party cups, you can write the name on the cup, but how do you identify drinks when the drinks are bottles or cans?  It got me to wondering how I could come up with an easy way to identify each person’s drink that would be easy and portable.

“I have an idea,”  I said to Carl.  Carl says if he had a dollar for every idea I had, he would be a millionaire.  I would even venture to say a multi-millionaire.  I told him the dilemma and expressed a desire to find a solution.  I originally thought about different colored yarn for each member of the family.  I could pre-cut some yard and tie it around each drink.  That didn’t really work for me, because I would have to go and buy yarn.  Plus the yarn would have to be untied from each drink before I could recycle it.  Carl suggested slap bracelets.  Not a bad idea, but we didn’t have any or know where to buy them.

Then enters Madison with a silly band on her wrist.  She took it off her wrist, and proceeded to roll it on and off of her Coke can.   It fit perfectly around the can.  Ah-ha, I thought.  I told Madison that I wanted to use the silly bands to identify the drinks so no one would lose their drink.  She looked at me skeptically and said, “Mom, are you going to organize the drinks?”  Secretly, in my mind, I pictured myself with one hand on my hip and one hand up in the air with a sword saying, “Yes, I am the Organizer.”  Instead, I just told her I was tired of throwing money down the drain.

If you have kids, chances are you have several, if not, hundreds of these things around the house.  I went around the house and collected different shapes and colors of the silly bands and put them in a small plastic bag.  The important thing is not to have any duplicates so one person can have the saxophone and the other person has the peace sign, etc.  They fit around cans and plastic bottles, or they can be tied to the can tabs or the plastic bottle necks.  They are removable, reusable, portable, and waterproof.

I thought the kids might be resistant to the idea.  It actually has been surprising to me how readily they have embraced the idea.  They want to stake claim to their drink.  They also enjoy picking out which shape and/or color they want.  I came into the kitchen the other day, and my two kiddos had gotten matching drinks.  They had already put the silly bands on their drinks without any reminders.  There was no fighting or arguing over the drinks.  They knew which was which.  It made this organizer very happy. 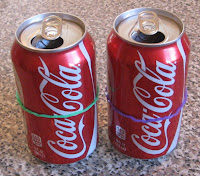 Pictures of cans with silly bands around the can and on the can tabs.