The room basket is a basket I use to put toys, books, shoes, or other items in throughout the day to keep the house picked up.  It is a concept I developed for my home to keep it neat and tidy throughout the day especially when my kids were a little younger.  It is also a great asset to have when having to do a quick clean before unexpected company.

The room basket came into play when my kids were younger, but not toddlers anymore.  They were getting old enough to pick up after themselves.  They would get out toys to play with throughout the day.  Upon looking around the house, there might be a truck or two in the dining room.  Books and a doll in the living room.  Darth Vader and his Stormtroopers might be set up for battle against Luke Skywalker on the kitchen island.  Shoes and socks thrown off by the door.  I don’t think that I need to go on.  We all know the clutter and mess kids can produce in a short amount of time.  It is really quite impressive, actually.

I started by picking up the main part of the house and putting their items just inside the doorway of their rooms for them to put away.  I quickly began to dislike this method, because I was still felt I was picking up after them.  It also made their room look like a mess with this pile of stuff by their door.  Some friends suggested putting toys in time out or donating left out toys to Goodwill.  That really didn’t feel right to me either.  I wanted my kids to feel free to play in our home without the fear of losing their things.  And if I was honest, I had lots of items I had left out myself that contributed to the clutter as well.  This is where the idea for the room basket entered into my brain. 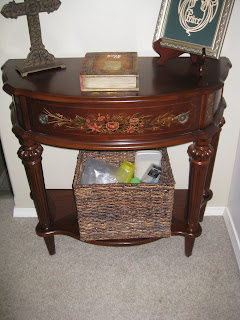 My rules for taking an item out of the basket were and still are, “Did you use it,” “Did you get it out,” and “Is it Yours?”  If the child can answer yes to any of those questions, then it is their item to pick out of the basket and put away.

The room basket also became, unexpectedly, a donation decider as well.  As toys got put in the basket, I heard numerous times, “I don’t really want that anymore,” or “That is not mine.”  If no one wanted it or no one claimed it, it went into the donation bin to be donated to Goodwill or another similar organization.

As my children have gotten older, I have not had to use the room basket as much.  I do still use it, however, if I want or need to do a quick clean-up prior to having guests over.  It has been such a great tool for me to keep my house picked-up.  All that in one basket.  Who knew?

“By wisdom a house is built, & through understanding it is established.”  Proverbs 24:3, NIV