Many months ago, Carl & I were at the airport when I noticed a sign advertising the Missoula Marathon.  It is an annual event that offers a full marathon and a half marathon, and has been voted the Best Overall Marathon in 2010 by Runner’s World Magazine.  My curiosity was piqued.

I said to Carl, “I think that would be fun to do.”  He looked at me as if I had lost my mind and to his credit, maybe I had.  I then said something even more outlandish, “What if we ran the half marathon together.”  I didn’t think his look could have gotten more profound, but it did.  He quickly told me he had no intention of running and very reluctantly said OK if I wanted to.

I have to admit, I felt he didn’t have any faith in me, and maybe I really couldn’t blame him.  I am not a runner.  I have flat feet for crying out loud.  I had not even begun to train, and who signs up and pays to run for several hours anyway (apparently several thousand people).

I started to walk the dog one mile then two.  Madison said she would run with me so I started running with her.  She totally skunked me.  I reasoned that I had 28 years on her and 50 more pounds and that made me feel better.

I did actually begin to realize the half marathon was probably asking too much so I decided to sign up for the 5K which happens on the same weekend as the marathon.  I asked Madison if she wanted to run, and she said no.  I knew Carl’s answer would be no.  Nathan would probably have a hard time breathing.  So, I was going at it alone.

This event required me to do a lot of soul searching.  For most of my life I have been a follower.  If I went to the movies, I wanted to go with someone.  If I went to the pool, I would want to go with a friend.  If I signed up for a 5K, I would have only signed up with someone else.  The life experience turned itself into spiritual questions for me.  The questions in my head during this process were:  If no one goes with me, will I still go?  Will I still move forward even if no one else wants to come with me?  Will I do what I feel God is calling me to do even if no one else sees my vision?  Will I run the race even if no one runs with me?

So, the answer was yes.  I arrived on race day with my family in tow, but I would be running alone.  I strapped on my iPod, plugged my ears with earphones, and started my race.  I’m sure the runners behind me were sure I was listening to appropriate songs such as “Whole Lotta Shakin’ Goin On” by Jerry Lee Lewis or “Shake, Rattle and Roll” by Big Joe Turner.  I wasn’t the most in shape person there by a long shot, but I got out there and did it.  I was grateful to God for a body that can run and breath and balance me enough to get me down the path.  And in the end, I may have run it alone, but I was not in it alone.  My family was there at the end taking my picture and telling me good job.  Carl even said as he watched me run, he wished he had run with me.  Wow! 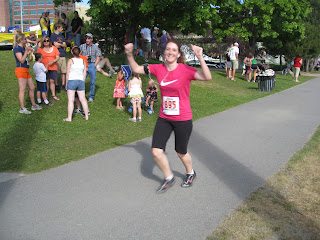 My mother-in-law recently told me that I have drive.  I see that.  I feel that.  I feel a sense of urgency about life that I never have felt before.  An urgency to experience life, to not sit around and let it pass me by.  Maybe it is the times we live in.  Maybe it is the age of my children or a mid-life crisis.  I don’t know, but I have a feeling of urgency to soak it up while I can.

We watched the movie Secretariat last night.  In that movie Penny Chenery says, “This is not about going back.  This is about life being ahead of you and you run at it.  Because you never know how far you can run unless you run.”  I probably ran about two-thirds to three-quarters of the 5K and walked the rest.  I know I can’t run at life every day.  There are bills to pay and laundry to do.  There are days when walking seems mighty nice, but my dream is to run at it the majority of the time.  And as long as God allows me to run, I want to run, because I don’t know how far I can run unless I get out there and run.

“But those who wait on the Lord shall renew their strength;  They shall mount up with wings like eagles, they shall run and not be weary, they shall walk and not faint.”  Isaiah 1:31