Rodney King was an African American man who was beaten by Los Angeles cops in 1991, and the beating was caught on tape.  The acquittal of 4 police officers who were charged with using excessive force sparked the 1992 LA Riots in which King pleaded for the rioters to stop when he used the infamous words in his speech, “…can we all get along?”1


Those are some pretty powerful words, aren’t they?  Can we all get along?  It should be so simple to get along and to treat others as we would want to be treated, but the truth is we struggle as humans with this.  Why?  We love ourselves and want our own way too much! 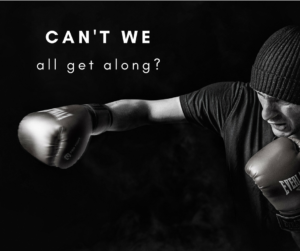 James 4:1-3 (ESV) says, “What causes quarrels and what causes fights among you?  Is it not this, that your passions are at war within you?  You desire and do not have, so you murder.  You covet and cannot obtain, so you fight and quarrel.”

This past week, one group rallied that only white lives mattered while another rallied that black lives matter.  One group thinks a statue should come down while another group fights to keep it up.  One man in a car feels strongly enough to injure and kill other human beings.  Horrible, hateful and harmful words were spoken to one another for the sake of a cause in which they believed and violence ensued.


1 John 4:20-21 (ESV) says, “If anyone says, ‘I love God,’ and hates his brother, he is a liar; for he who does not love his brother whom he has seen cannot love God whom he has not seen.  And this commandment we have from him: whoever loves God must also love his brother.”
Does evil exist?  You bet it does.  It is alive and well right down in my heart, in your heart and every heart in the whole world too.  Heinous things occur and will occur every day while we are on this earth.  There is not one of us who is righteous (Romans 3:10). That is why Christ came to die on the cross to save ALL of us!

I feel like this world is going absolutely mad.  One group thinks differently from another group, and they hate each other for it.  There is so much hate and so much dissension.  Isn’t it because both groups want their our own way so badly?

I have numerous relationships with people who believe differently than I do whether I agree with them or not.  I believe I can and I do still love them in spite of those differences.  I can still be civil with them, love them and even have a respectful conversation about our differences.  It is God’s job to convict someone’s heart, not mine.  I can speak the truth of God’s Word to them in love.  It is possible to not hate.  It is possible to love.
“Hate, it has caused a lot of problems in the world,
but has not solved one yet” Maya Angelou